Written by marvelouztek on March 29, 2020. Posted in Home And Business Security. Leave a Comment

THE BEGINNING OF THE SURVEILLANCE CAMERA SYSTEM 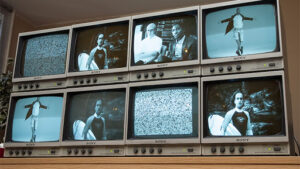 In order to have a surveillance camera system, the main component, the video camera, had to be invented first. The main difference between video cameras and the cameras being used to create movies was the medium: video cameras capture images electronically rather than on film. This primary difference in cameras meant there wasn’t a way to retain or record video, so the first video camera systems had to be constantly monitored by human eyes. The earliest video camera systems were firstly developed for television production in the 1920s and 1930s. The objective was, as you may imagine, allowing for real-time live broadcasts of events and shows, rather than the tedious filming and editing process necessary to create movies. Thanks to the entertainment industry for making the surveillance camera possible.

CAMERAS ARE MORE THAN ENTERTAINMENT

As technology advanced, the uses for the video camera expanded past entertainment needs. The development of closed-circuit systems was the next major step allowing the signal from cameras to be broadcast to only a select few monitors vs. broadcasted to all TVs. With this capability, the closed-circuit television system came into existence. It’s at this point that video camera technology began to be used for surveillance and entertainment purposes.

THE BEGINNING OF BIG BROTHER

In 1942 in Nazi-occupied Germany the first video surveillance system was installed to observe the firing of long-range guided ballistic missiles. Not long after, CCTV systems became available in the United States, to government entities and commercial users who wanted to keep an eye on their business. At this point, however, the surveillance camera system still needed human help; there was no technology available to record video, so a person had to monitor the screens for a surveillance camera system to do any good. These primitive solutions were made up of cameras and monitors and they could only be used for live monitoring. They did not have components capable to record footage.

Very primitive reel-to-reel recording systems were later introduced to help record the data gathered. However, the magnetic tapes had to be swapped manually, which was an unreliable, difficult, and costly process. Individuals had to thread the tape from the reel through the recorder and onto an empty take-up reel. Unsurprisingly, such systems were not common.

THE DEVELOPING OF VCRs

Major developments in the history of surveillance cameras occurred when video cassette recordings (VCRs) became readily available in the 1970s. This technology was quickly incorporated into CCTV systems, offering an easier and logical way for surveillance cameras to be recorded.
It was no longer necessary for people to monitor live screens. Instead, the systems could be set up and left to run by themselves. operators could then review the information recorded whenever they wanted to. This made CCTV much more popular and attractive among businesses.
However, it’s important to note that these solutions were far from easy. The VCR tapes still had to be changed on a regular basis or re-written. If users wanted to store information for any length of time, they had to keep a collection of tapes.

During the 1990s, digital multiplexing was developed, allowing several cameras to record at once, as well as time lapse and motion-only recording. This saved time and money which then led to an increase in the use of CCTV.  This technology allows video signals from a number of surveillance cameras to be combined and viewed on one monitor. For example, it means that if a company has four surveillance cameras, each of these video signals is synchronized by the multiplexer and recorded on the same tape. This step forward made surveillance camera solutions more efficient and it helped to increase their popularity among users.

Progression in digital technology since the turn of the century has led to further improvements. VCRs have been replaced with digital video recorders (DVRs) with hard disk drives, making surveillance systems simpler and more user-friendly. Multiplexers are also now built into these solutions, meaning the kits are easier to install and operate. Digital systems have also removed the need for videotapes, meaning organizations no longer have to hoard tapes in order to store information.

it’s feasible to purchase network video recorders (NVRs) from a company such as Marvelouz Teknology. These systems work by processing, encoding, and streaming video camera footage to the NVR for storage or remote viewing. The solutions are very useful for companies with many site locations because they allow users to view various locations at any one time across the network or internet more easily and in higher quality than the remote viewing of a DVR allows.